I always enjoy a good controls problem modeled with Simulink and Stateflow. Dr. Mrozek’s submission provides a simulation of a “platform mobile carrying robot with welding equipment.” They model the dynamics of the robot as a linear time-invariant system. You can see it represented by the block labeled as “LTI System” in the Simulink model.

To the right is a block labeled “Stateflow Chart.” This is the controller that supplies an input to the robot. If we open up the details of the chart, we observe that there are two control modes: oscillatory and hyperbolic. Both are proportional controls, but they rely on different gain constants (those variables that start with “k” in the u equation).

The submission includes a MATLAB script that defines various parameters used by the simulation. The script then executes the simulation for different initial conditions of the robot and different control modes. Effectively, we study what happens when the robot is given a particular initial velocity and initial displacement from the resting position.

The end result is a rather satisfying figure that displays the position of the robot on the x axis and velocity on the y axis. Each point on a given line corresponds to the position and velocity of the robot at a particular moment in the simulation. The green trajectories are hyperbolic and quickly go unstable. The blue trajectories are oscillatory unstable simulations that rotate and move away from the origin of the coordinate system. The red trajectories are from sliding mode runs, a control strategy that offers “fast response and short settling time.” 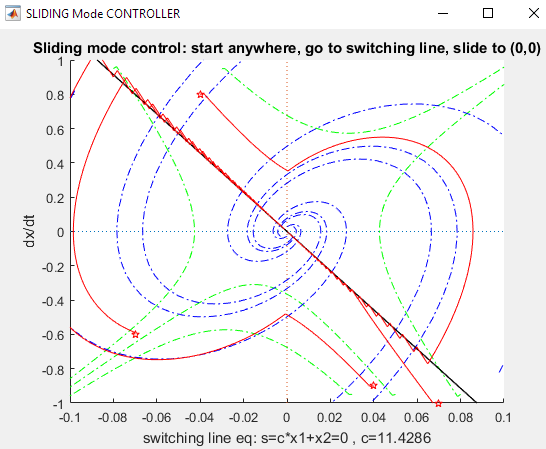 Wonderful though this is, there’s always room for improvement. Here are a few ideas I have that would make the exercise easier for the developer and end-user.

Let us know what you think here or leave a comment for Bogumila & Zbigniew.