I remember while learning Simulink, drawing ordinary differential equations was one of the early challenges. Eventually I discovered a few steps that make it easier. First, rewrite the equations as a system of first order derivatives. Second, add integrators to your model, and label their inputs and outputs. Third, connect the terms of the equations to form the system.

The mass-spring-damper system provides a nice example to illustrate these three steps. Let’s look at the equation for this system:

The position of the mass is

, and the acceleration is

To rewrite this as a system of first order derivatives, I want to substitute

. Then I can identify my two states as position

And this is rewritten at two first derivatives:

Velocity and position are the states of my system. When thinking about ODEs, states equal integrator blocks.

Add one integrator per state, label the input and output

I always make a point to write the equations as an annotation on my diagram. I refer to this as I add blocks to the canvas. Here are the two integrators for the mass-spring-damper system. 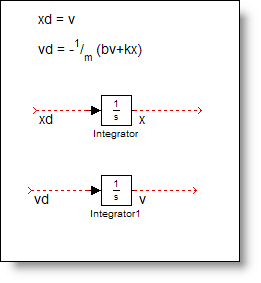 ), and the output is the state variable.

The first connection is easy,

, so I connect the output of the velocity integrator to the input of the position integrator. When this happens, aligning the integrators in the diagram shows that you have a second order system. 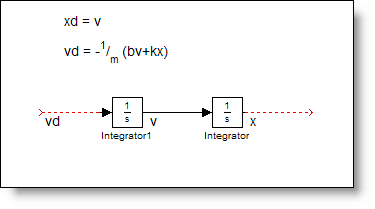 To implement the second equation, I add gains and sums to the diagram and link up the terms. 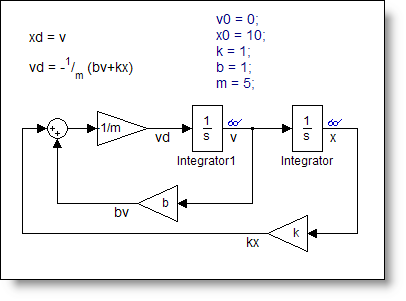 Simulating the model for 50 seconds produces the following trace for x (blue) and v (red). 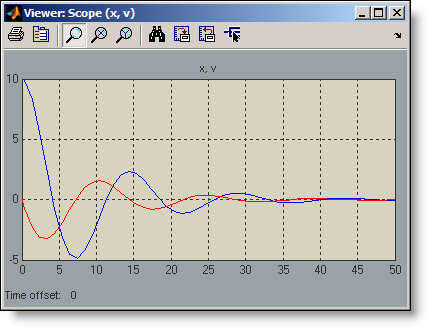 Over time, I have become more comfortable in converting from equations to models, and I do not always rewrite the states. I think that fundamentally I still follow the same process:

Is this the same process you learned when you started using Simulink? Do you have any special tips on how to draw ODEs? Share your ideas and leave a comment here.