Have you been interested in data science competitions, but not sure where to begin? Today's guest blogger, Toshi Takeuchi, would like to give a quick tutorial on how to get started with Kaggle using MATLAB. 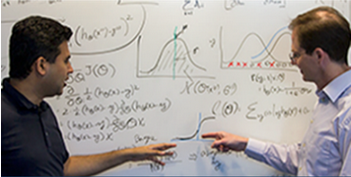 The Titanic Competition on Kaggle

MATLAB is no stranger to competition - the MATLAB Programming Contest continued for over a decade. When it comes to data science competitions, Kaggle is currently one of the most popular destinations and it offers a number of "Getting Started 101" projects you can try before you take on a real one. One of those is Titanic: Machine Learning from Disaster.

Don't worry if you don't rank well on this one. There are entries with a 1.00000 score in the leaderboard, but they either seriously overfit their models to the test data, or perhaps even cheated, given that the full dataset is available from the other sources. That is not only pointless, but also raises serious questions - what kind of standards of conduct must data scientists meet to produce trustworthy results?

So just think of this as a way to do a practice run on Kaggle before you take on a real challenge.

If you haven't done so, sign up with Kaggle - it's free. Then navigate to the Titanic data page to download the following files:

We begin by importing the data into tables in MATLAB. Let's check the imported data. I am assuming that you have downloaded the CSV files into the current folder.

Train contains the column Survived, and it is the response variable that denotes the survival outcome of the passengers:

When you downloaded the data from Kaggle, you probably noticed that additional files were also available - gendermodel, genderclassmodel, etc. These are simple predictive models that determined the outcome based on the gender or gender and class. When you tabulate the survival outcome by gender, you see that 74.2% of women survived.

If we predict all women to survive and all men not to, then our overall accuracy would be 78.68% because we would be correct for women who actually survived as well as men who didn't. This is the baseline Gender Model. Our predictive model needs to do better than that on the training data. Kaggle's leaderboard shows that the score of this model on the test data is 0.76555.

Back to Examining the Data

When we looked at Train, you probably noticed that some values were missing in the variable Cabin. Let's see if we have other variables with missing data. We also want to check if there are any strange values. For example, it would be strange to see 0 in Fare. When we make changes to Train, we also have to apply the same changes to Test. 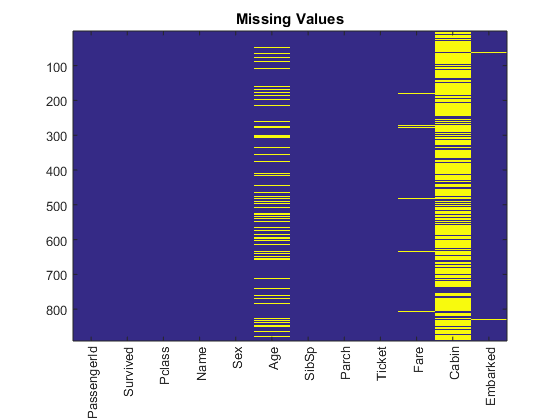 We have 177 passengers with unknown age. There are several ways to deal with missing values. Sometimes you simply remove them, but let's use the average, 29.6991, for simplicity in this case.

We have 15 passengers associated with unknown fares. We know their classes, and it is reasonable to assume that fares varied by passenger class.

With regards to Cabin, you notice that some passengers had multiple cabins and they are all in the first class. We will treat missing values as 0. Some third class cabin numbers are irregular and we need to handle those exceptions.

For two passengers, we don't know their port of embarkation. We will use the most frequent value, S (Southampton), from this variable to fill in the missing values. We also want to turn this into a numeric variable for later use.

Let's also turn Sex into a numeric variable for later use.

Let's remove variables that we don't plan to use, because they contain too many missing values or unique values.

At this point, we can begin further exploration of the data by visualizing the distribution of variables. This is a time consuming but very important step. To keep it simple, I will just use one example - Age. The histogram shows that you have a higher survival rate for agess under 5, and a very low survival rate for ages above 65. 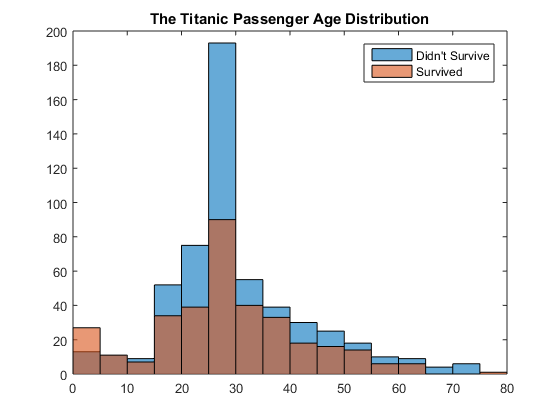 How can you take advantage of this visualization? We can create a new variable called AgeGroup using discretize() to group values into separate bins like child, teen, etc.

Creating such a new variable by processing existing variables is called feature engineering and it is a critical step to perform well with the competition and it is where your creativity really comes in. We had already created a new variable nCabins to deal with missing data, but often you do this as part of exploratory data analysis. Let's also look at Fare. 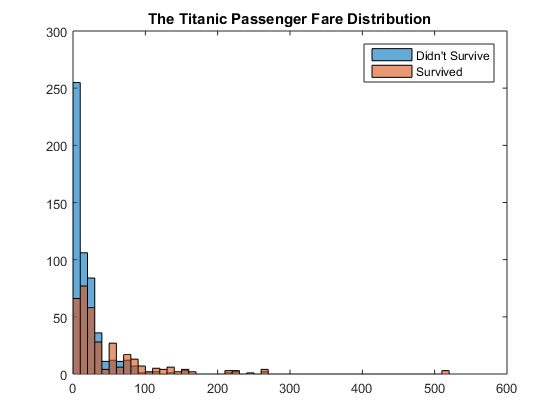 The Classification Learner app is a new GUI-based MATLAB app that was introduced in R2015a in Statistics and Machine Learning Toolbox. This will be your secret weapon to try out different algorithms very quickly. Let's launch it!

At this point, we are ready to apply some machine learning algorithms on the dataset. One of the popular algorithms on Kaggle is an ensemble method called Random Forest, and it is available as Bagged Trees in the app. Let's try that by selecting it from the classifier menu and clicking on the Train button.

When finished, you can open the Confusion Matrix tab. You see that this model achieved 83.7% overall accuracy, which is better than the Gender Model baseline. 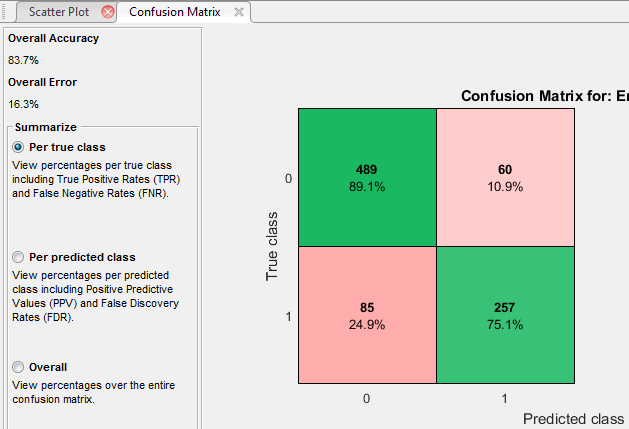 Boosted Trees is another family of ensemble methods popular among Kaggle participants. You can easily try various options and compare the results in the app. It seems Random Forest is the clear winner here. 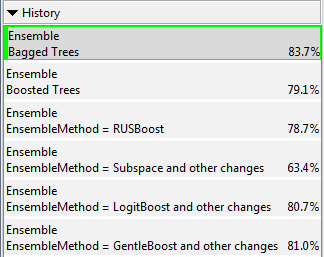 You can save the trained model into the workspace by clicking on Export Model in the app. If you save the model as trainedClassifier, then you can use it on Test as follows.

You can also generate a Random Forest model programmatically using TreeBagger. Let's adjust the formatting of the data to satisfy its requirements and split the training data into subsets for holdout cross validation.

Now we can train a Random Forest model and get the out-of-bag sampling accuracy metric, which is similar to the error metric from k-fold cross validation. You can generate random indices from the cvpartition object c to partition the dataset for training.

One of the benefits of Random Forest is its feature importance metric, which represents the change in prediction error with or without the presence of a given variable in the out-of-bag sampling process. 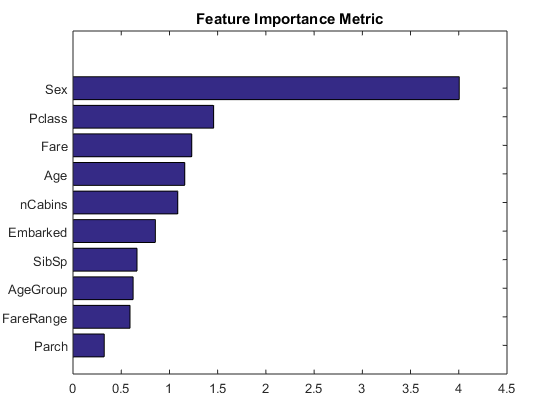 As expected Sex has the most predictive power, but nCabins, an engineered feature we came up with, also made a significant contribution. This is why feature engineering is important to do well in the competition! We also used fairly naive ways to fill missing values; you can also be much more creative there.

To get a sense of how well this model actually performs, we want to check it against the holdout data. The accuracy drops significantly against unseen data, and that's what we expect to see when we submit our prediction to Kaggle.

When you tweak your features and modify your parameters, it is useful to use a perfcurve plot (performance curve or receiver operating characteristic plot) to compare the performance. Here is an example. 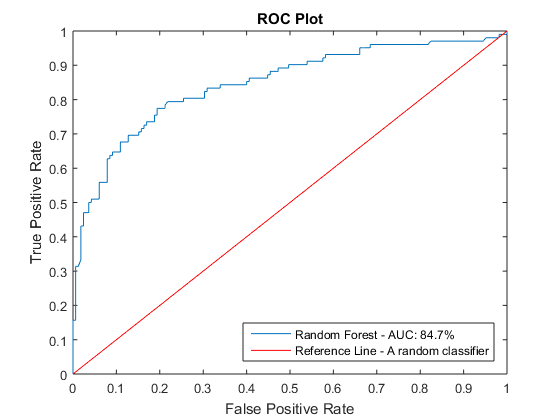 To enter your submission to the Kaggle competition, all you have to do is to upload a CSV file. You just need the PassengerId and Survived columns for submission, and you populate the Survived with 1s and 0s. We are going to use the Random Forest model we built to populate this variable.

Conclusion - Let's Give It a Try

When you upload the submission CSV file, you should see your score immediately, and that would be around the 0.7940 range, putting you within the top 800. I'm pretty sure you are seeing a lot of room for improvement. For example, I just used averages for filling missing values in Fare but perhaps you can do better than that given the importance of the feature. Maybe you can come up with better engineered features from the variables I glossed over.

If you want to learn more about how you canget started with Kaggle using MATLAB, please visit our Kaggle page and check out more tutorials and resources. Good luck, and let us know your results here!