Here is Part 2 of the Series.

In Part 1 of this series I discussed the total solar eclipse that will occur on August 21, 2017 where the path of totality will pass over the continental United States. The National Solar Observatory is running a citizen science project called the Citizen CATE Experiment. The project will have volunteer teams spread out along the path of totality to capture images of the sun's corona during the eclipse. This will give solar astronomers an unprecedented amount of data that they can use to study coronal dynamics to try to understand how temperatures in the corona can be orders of magnitude higher than on the sun's surface. MathWorks is one of the sponsors of this project and several MathWorks staff are among the volunteers.

In this post, I'm going to talk about the project volunteers, the equipment they will be using on the day of the eclipse, and how the volunteer teams are being trained.

As I mentioned, the Citizen CATE Experiment will use a fleet of telescopes spread across the United States to observe and record data from the eclipse. Those telescopes will be operated by a group of volunteers at each site. Each state on the eclipse path has a coordinator who is organizing their state's volunteers to make sure they have the equipment and training they need for the eclipse. The states on the eclipse path are Oregon, Idaho, Wyoming, Nebraska, Kansas, Missouri, Kentucky, Tennessee, North Carolina, and South Carolina.

The project's original goal was to recruit 60 volunteer teams. Those would be funded by money from corporate sponsors and from grants from NASA and the National Science Foundation. Currently, the number of teams is up to 68. Those extra 8 teams are all self-funded.

This is a citizen science project so most of the volunteers are amateurs. There will be a few professional astronomers -- professors and PhD students -- among the volunteers. The rest will be university groups, high schools, astronomy clubs and individuals. For example, Wyoming, which has the largest number of sites at 11, has 7 sites operated by teams from local high schools. Wyoming also has a site that will be operated by an astronomy club coming from New York. 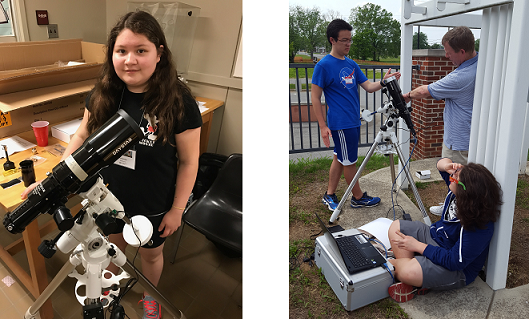 Each Citizen CATE team will use identical equipment at each observing site. That will ensure that the data from all the sites can be combined to get images for 90 minutes of totality as the eclipse makes its way across the continental United States.

The Telescopes: The telescopes are 80 mm refractors manufactured and donated by DayStar Filters . What this means is that the telescope has an aperture of 80 millimeters (about 3.1 inches). The aperture is a measure of a telescope's light gathering capacity. Usually the higher the aperture the better -- more light gathering capability for viewing dim objects. For solar astronomy, an 80 mm aperture telescope is plenty big enough. A refracting telescope is one that uses a lens to focus the light. The other major type is a reflecting telescope which uses a mirror to focus the light. Each telescope will be equipped with a white-light, full aperture filter. The filter can only be removed when the sun is fully eclipsed.

The Mount and Drive Systems: The telescopes sit on a German equatorial mount manufactured and donated by Celestron. The advantage of this type of mount is that it can be set up to follow an astronomical object as it moves across the sky (due to the earth's rotation). The mount has two motors which slowly move the telescope to keep the target in view over time.

The Cameras: Cameras will be attached to each telescope to capture images of the eclipse during the totality phase. The cameras are Point Grey Grasshopper3 5.0 MP Mono USB3 Vision cameras. These cameras are monochrome with a resolution of 2448 by 2028 pixels (about 5 Megapixels). They use a Sony IMX250 CMOS sensor. They have a maximum frame rate of about 75 frames per second and an exposure range of 0.006 microseconds to 32 seconds. Camera control and image capture will be done using MathWorks Image Acquisition Toolbox.

The Software: Each volunteer will also have a laptop that will be running an application written with MATLAB and Image Acquisition Toolbox. During the period of totality, the camera will cycle through a series of different exposure times. Each cycle will take approximately 2 seconds. After the eclipse is over, Image Processing Toolbox will be used to create a high-dynamic range (HDR) image from each multiple exposure cycle. A site with 2.5 minutes of totality will get about 75 HDR images.

Here is a picture of the telescope assembled with the camera attached. 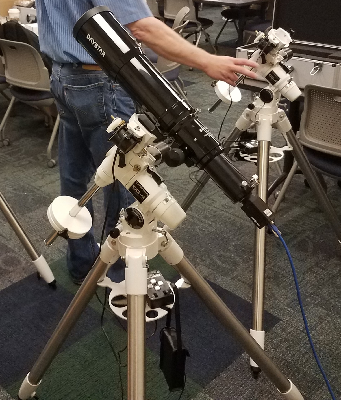 During the months of April and May, the state coordinators organized training for all of their state's volunteer teams. We attended our training at Tennessee Technological University with about ten other volunteer teams.

The first thing we had to learn was how to assemble the tripod, mount, and telescope. That included installing the motors that allow the telescope to track the sun. Then we learned how to attach the camera and connect it to the PC to capture the images. As soon as we finished, we were told to disassemble everything and do it all again. The trainers wanted to make sure we really learned how everything works.

After lunch, we took all the equipment outside to learn to track the sun and use the cameras. Surprisingly, the hardest thing to do was to "capture the sun". That means aiming the telescope at the sun. As soon as you put a white light filter on the telescope, everything goes dark -- the sun is the only thing bright enough to penetrate the filter. So you have to manually move the telescope around until the sun comes into view. Once that's done, the motors on the telescope mount will track the sun.

The last step in the training was to disassemble the everything and pack it up for shipping. We shipped our equipment back to Massachusetts so we could practice for the eclipse. We'll ship it back to Tennessee a few days before the eclipse.

If you have an interest in amateur Astronomy or have any questions or comments about the Citizen CATE experiment, please here.

Next Up: Practicing for the Eclipse

That's all for now. In my next post I'll describe how the teams are rehearsing for the eclipse. I'll talk in some detail about how MathWorks software is being used to capture and post-process images from the eclipse. Finally, I'll show some images from trial runs performed by some of the teams.