Before he Picks this Week's featured File Exchange submission, Brett would like to give a nod of appreciation to the developers of the Image Processing Toolbox. Back in September of 2018, I wrote here about several tools that helped me solve a path-reduction problem that I was working on. In short, I had representations of several paths that had a lot of redundant vertices--they were collinear (or rather, collinear within a specified tolerance) with other consecutive vertices, and added no useful information to the graphics I needed to generate. In my effort to algorithmically eliminate them, I found my way to the reducem implementation of the "Douglas-Peucker algorithm" (AKA, the "Ramer-Douglas-Peucker algorithm") in the Mapping Toolbox.

There were several nice implementations of the algorithm on the File Exchange, and they gave me an easy Toolbox-independent path forward (ahem) for the problem at hand. I discussed the problem with the developers of the Image Processing Toolbox, and...lo and behold, about a year after that discussion (in R2019b), the team released reducepoly and, reduce as a method of images.roi objects. It's not "Toolbox-independent," per se, but it is more accessible to an image processing geek like me, and now readily available to users of one of our most popular tools. I'm very pleased to see that--nice work, Team!

And now, because we can all use a bit of levity in these trying times, I'm going to Pick a really nice MATLAB version of Minesweeper. Brian Moore's File Exchange contribution gave me and my son Cody (who is a bit of a Minesweeper addict, and whose game I captured below) a welcome relief from the tedium of in-home confinement. 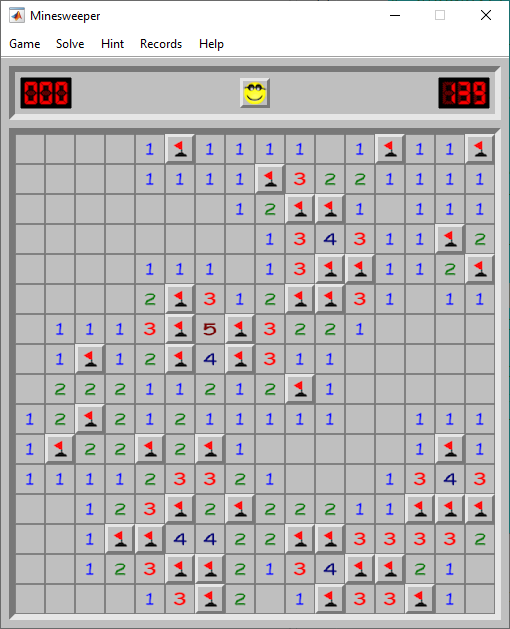 There are other implementations of the game on the File Exchange--but Brian's was the first one I tried that installed directly with no problems. Thanks, Brian!