Last month, in the wake of Bob's departure from MathWorks, I challenged readers to alter our picture of the Three Amigos--Brett, Bob, and Jiro--to create a Bob-free image usable for this blog. That competition is officially over, and I would like to recap the entries.

Corey's code calculated in a series of lines the "extent" of Bob, and erased him line-by-line. Here's the image Corey's code produces: 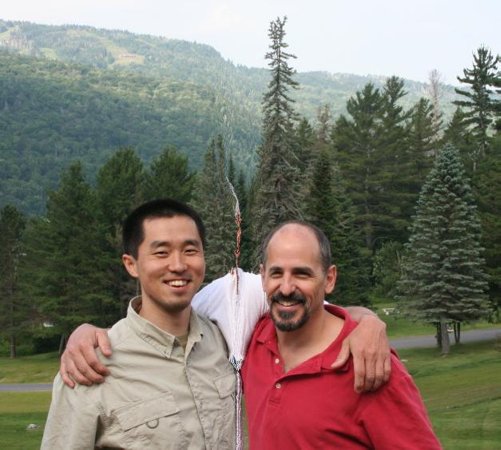 Corey wrote that he first implemented this using point-by-point deletion, "but that took way too long." So he resubmitted using the line-by-line approach, with which he saw a significant speedup.

Gajendra came up with a clever approach to the problem only a week after his introduction to MATLAB(!). First, he cropped Bob column-by-column. But as we've seen, that leaves a portion of Bob's torso visible. However, Gajendra cleverly masked and filled in the torso region with a "tiled stamp" sampled from the background trees. His result is shown here: 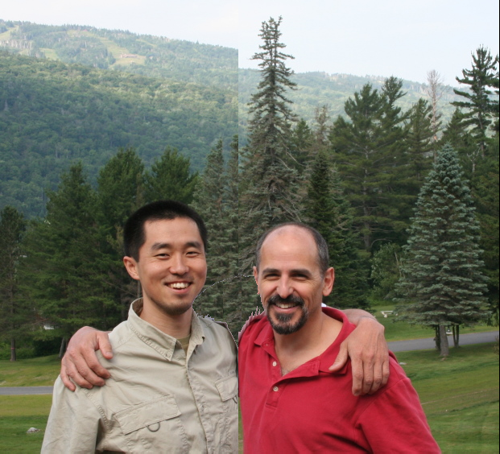 Impressive, especially considering that Gajendra is a newbie!

Igor provided a late entry, basically cropping and concatenating the left and right halves of the image. He suggested that erasing Bob completely is impossible; that we cannot get rid of the hole (the "ice of separation") left by simply cropping out the middle of the image. He also postulated that fixing the resulting discontinuity (step) in the background is not possible. Here's Igor's image: 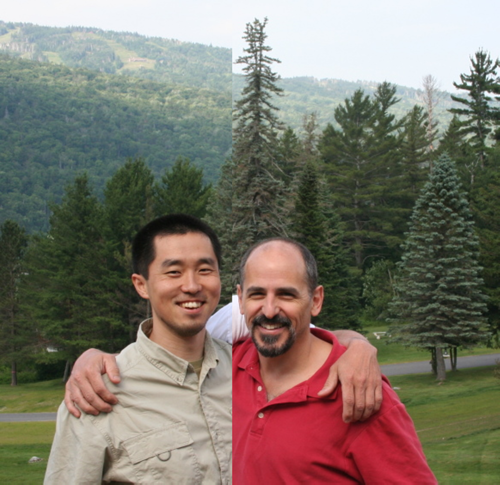 Richard took a different tack: he blurred the image in the rectangular region over Bob. The resulting image suggests that Bob is fading from our memory. Not so! Nonetheless, here is Richard's image: 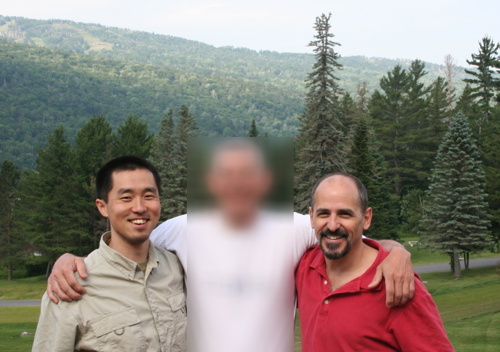 Sean first did a crop-and-concatenation to eliminate most of Bob. But then he went further. Using his own "ShrinkWrap" helper function (you should consider sharing that on the File Exchange, Sean!), he created a binary map of large, bright objects, and manually determined which one corresponded to Bob's torso. With a neat bit of code, he replaced Bob's torso with a snip of trees. To hide some of the discontinuity lines, he then executed an overall median filter to slightly blur the image. Here is the result: 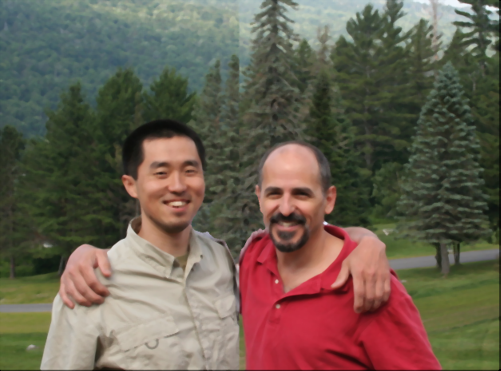 I promised to award two prizes for this competition: "one for the person whose code results in the best usable Bob-free image, and one for the person with the most creative approach to solving the problem." I'm going to say that Sean wins the grand prize for best re-usable image. His approach, and his mastery of image processing, are impressive. Congratulations, Sean! For most creative approach, I like the tiled stamp method that Gajendra used to fill in the void left by deleting Bob's torso. (Richard's masking of Bob was creative, too, but didn't really result in a "Bob-free" image.) Congratulations, Gajendra! And what the heck: everyone who played will be receiving a small token of our appreciation! Thanks, guys, for making this competition fun and successful!

My own solution is presented today as a guest post on Steve on Image Processing. Steve's blog, by the way, always makes for interesting reading, and is highly recommended for anyone interested in the topic. Subscribe via email here, of follow the blog as a feed by subscribing here.