In the past, I’ve highlighted a couple of new product features which were related to previous Picks: “Interactive Legend in R 2016a” and “Does your origin go through zero?”. This week’s post is of the same nature.

Back in 2013, I posted this blog on creating line plots with fewer markers. This is especially useful when you have a dense (high-sampled) signal that you want to plot with markers. In R2016b, you can use the new MarkerIndices property to specify which points to add a marker to.

For example, if you want 10 evenly-spaced markers, you can do the following. 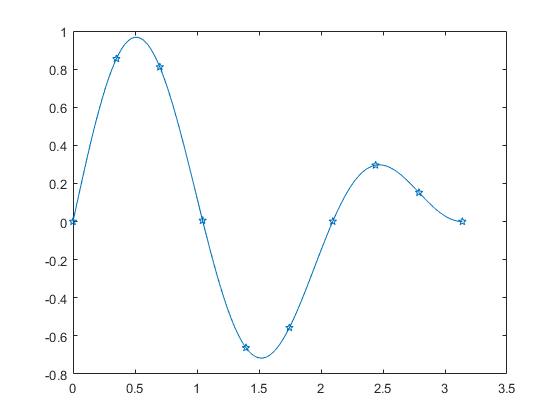 In April 2015, I posted another blog on parsing JSON files. In R2016b, we now have jsonencode and jsondecode. I’ll use the same example I used in the 2015 blog post. Let’s say we have example.json the has the following content.

jsondecode works on character arrays, so we will first read in the text data.

The output is a structure.

Give these new features a try. If you’re using pre-R2016b MATLAB, be sure to check out the blog posts I mentioned above. Let us know what you think here.