My pick this week is the current version of Chebfun. Some of you may be thinking: "You're repicking it, it's already been picked" and discussed on Cleve's blog! This is sort of true; the previous version of chebfun was picked and is still available.

I'm going to discuss the conversation I had with Professor Trefethen, the inventor of Chebfun, at the annual SIAM conference in July, 2016. He approached me at the MathWorks booth and wanted to know why the older version continues to see so many downloads when they're trying to encourage users to migrate to the new one? Here's a screenshot of the current downloads: 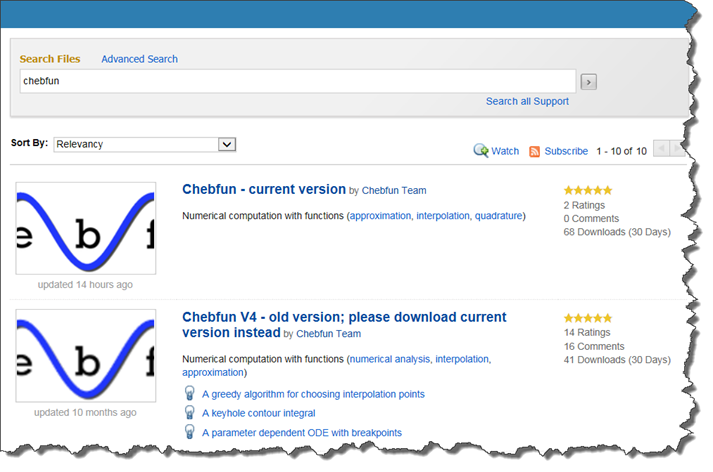 As you can see over the last 30 days (August 9, 2016), the old version has 41 downloads compared to 68 for the new one. But it clearly says "Please download current version". The description on the file's page repeats this and points at the new one and the chebfun website. Professor Trefethen was curious what could be done to migrate more people to the current version. The challenge is that he'd like the older version to remain available for people who intentionally need backward compatibility but not for any new users.

I suggested that the older code and example files be removed from the File Exchange and replaced with a readme that points to the current version. After some explaining the enhancements and fair warning, the readme would then have a link to where the old one could be downloaded be it the chebfun website or github.

Backward compatibility is obviously a challenge for the File Exchange. The integration with GitHub has helped but for files not linked to GitHub it can be difficult to impossible to get older versions of code when a file is updated.

Give the latest version of chebfun a try and let us know what you think here or leave a comment for the Chebfun Team.