Yesterday I came across this model:

At first look, one might think that these two implementations should give the same results. However this is not the case because the delayed data is different.

I think this model is a good opportunity to explain a property of the Transport Delay block that seems to confuse many users. 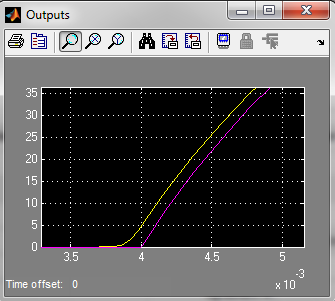 In this model, the Transport Delay blocks have their initial conditions set to zero. Consequently, at 4ms the input signal to the Transfer Function jumps from 0 to 100.

The first thing I did was to look carefully at the input to the transfer function. If we zoom around the 4ms region, we can see that the signal delayed by two 2ms delays (blue) follows a slope between 3.8ms and 4ms. The signal delayed by one 4ms delay shows a perfect step at 4ms. (Note that I used the new feature I described last week to add markers on the Simulink Scope!) 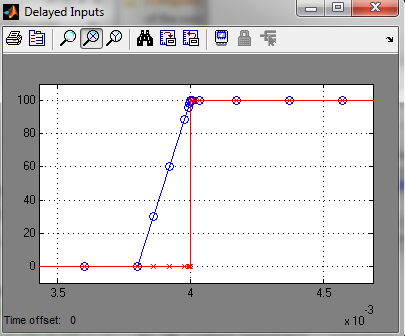 You might want to notice that the duration of the ramp signal in this model is a function of the solver maximum step size. Changes to the solver settings will change the simulation results.

To find an explanation for this phenomenon, let's looks at the documentation: 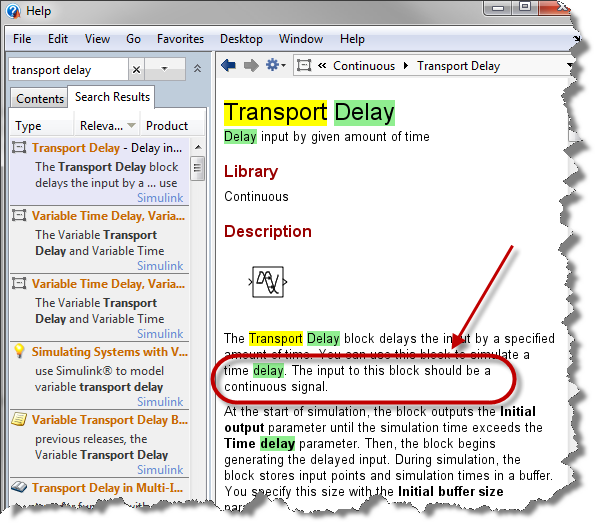 In case you missed it, I highlighted an important requirement for the usage of this block: The input to this block should be a continuous signal. When we say continuous here, we do not only mean the the signal should have a continuous sample time, but also that the value of the signal changes smoothly (difference between two values should be small).

As you can see in the documentation, the Transport Delay block interpolates linearly between points. This leads approximately to the following sequence of events:

The first 2ms delay in this model is generating a step at t=2ms. This step became the input to the second Transport Delay block. The step signal is not a continuous signal (continuous sample time and smoothly changing). This goes against the guidance specified in the documentation.

Of course, there are multiple ways to obtain the desired results. As it is often the case, the best solution will depend on the larger context into which this construct is used. For example, one way to avoid the step generated by the first 2ms delay is to set its initial value to 100. In that case the two 2ms delays will produce results identical to the 4ms delay.

Do you use the transport delay block? Did you ever got confused by this restriction on the signals you can feed to this block? Leave a comment here.