As you probably already know, MATLAB R2012a is now available for download!

One of my favorite feature in this release is the built-in support for running models on low-cost target hardware, including LEGO® MINDSTORMS® NXT and BeagleBoard. To give you an idea of this feature, here is a discussion I had with my friend Ashish Uthama.

Ashish and I started as Application Support Engineers at MathWorks on the same day. While I was focusing on Simulink, he quickly transferred into the Image Processing Toolbox team. Consequently, he never really had opportunities to use Simulink.

As part of my job, I am currently developing what we call Model-Based Design Labs. In these internal training labs, we use LEGO® MINDSTORMS® NXT to give participants a Model-Based Design experience. Ashish just signed up for the next set of labs I will teach next month.

Ashish: Hey Guy, I am really excited about the Model-Based Design Lab!. I just bought a LEGO® MINDSTORMS® NXT kit. Here is a YouTube video of what I did last weekend.

Guy: WHAT!!! You did not use Simulink to program the NXT???

Ashish: I was planning to, eventually. Isn’t there a whole lot of setup steps? Like downloading drivers, compilers, blocks and the associated configuration? I’ll get to it when I have more time to spare.

Guy: It used to be that way. But we have made the process a whole lot simpler with R2012a. Now it's literally a couple of clicks to install it. Once you have MATLAB and Simulink installed, go to the Tools menu and you should see an option to Install/Update Support Package.

In R2012a, we offer support packages for two targets: Beagle Board and LEGO® MINDSTORMS® NXT. Select the one you need and Simulink will install everything needed.

Ashish: That's it? And I only need MATLAB and Simulink installed? No Simulink Coder?

Guy: Absolutely, and in fact, it also works with the Student Version of MATLAB and Simulink.

Ashish: With just a basic introduction to Simulink I received 4 years back when I started with tech support at MathWorks, it only took me a couple of minutes to install the required software and an hour or so to get my first bot programmed! Here is a video of what it does:

Guy: Nice... and what does your model look like?

Ashish: As you can see below, I used the Color Sensor and configured it as a light sensor. I analyzed the data realized I could program it to follow the edge of the line. The algorithm is simple, white means turn left and black means turn right. 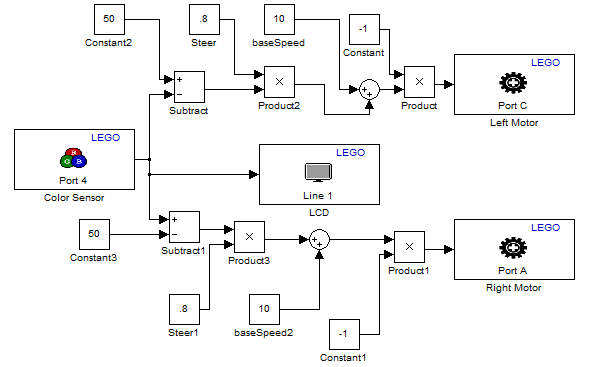 Guy: Not bad for a first try. I’ll show you how to improve that in the Model-Based Design Lab.

Ashish: Considering it's actually running a compiled program on the hardware, this is really impressive. I am excited about the power of Simulink!

Guy: I really think this built-in support for running models on low-cost target hardware is a great tool to learn many engineering concepts.

Do you think it could be useful for you to learn or teach engineering concepts and Model-Based Design?

For more information, consult the documentation for more details on how to run models on target hardware.