My colleague Sam and I wanted to find an example model with about 10,000 blocks.  I suggested the HL-20 model from the Aerospace Blockset, asbhl20.mdl.  Sam decided to measure the total number of blocks by running sldiagnostics:

Sam quickly sent me a message saying that the HL-20 model only had 5700 blocks.  What gives?

First, let us discuss a little history of sldiagnostics.  Over the years, Simulink developers have worked with many customers to learn about their modeling styles and assist in debugging problems.  Unfortunately some customers are unable to share their models because they might contain proprietary information.  The solution these developers created were a series of scripts that would quickly gather information about a model without any model algorithm information. These collected scripts then became the sldiagnostics function.  Because the output of these scripts was generally devoid of any proprietary data, even customers who could not share their models were able to provide the diagnostic information instead.

Most of the checks done by sldiagnostics help you gather an understanding of the model as a whole.  This is a great help in learning about models rather than having to browse through every system one-by-one.

The diagnostic information Sam gathered was the output of CountBlocks.  Here is a part of the text report for the HL-20 model.

The HL-20 model includes 9 ModelReference blocks.  (I introduced some of the basics of model reference a previous post.)  You can see the hierarchy of the model in the Dependency Viewer instance view. 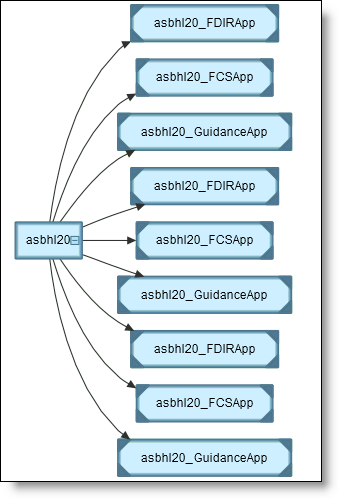 When I think about a model, I imagine the net collected functionality represented by it.  I think the number of blocks used to create that model is a simple measure for how much functionality/algorithm there is.  Model reference blocks contain the functionality of the entire model that they reference, however, sldiagnostics counts ever Model Reference block as only one block.

The measure I am really looking for is the subsystem equivalent implementation of all the blocks in the model.  To get this for the HL-20 model, you actually need to count the blocks inside each model referenced and multiply by the number of instances.  I wrote a MATLAB function to do this:

Here are the results of running this function:

In the end, we can see the HL-20 model has almost 11K blocks.  Do you use model reference? How many total blocks are in the hierarchy of your largest model?  Use the script above to gather this data and post it in the comments here.