In my experience most people do not know about this block. Let's look at an example were the Integrator, Second Order is especially useful.

The problem: Modeling a Second-Order system with saturation

More often than I would like to admit, I have seen users struggling to simulate Second-Order systems with saturation. For example this could be a cylinder with hard position limits, or a rotating shaft restricted between two angle limits. The model could look like:

Typically, users will try to model the cylinder using two Integrators in series and build a logic attempting to reset/disable/saturate them to obtain the correct relation between input force or torque, velocity and position. Let's look at a few examples highlighting why this is not as easy as this looks like.

As a first try, many users will try to model the cylinde using something like this:

In this case, the position saturates at the limits. However notice that when the position is constant, the velocity is not always zero, which is definitely wrong.

To fix the fact that position and velocity are not consistent, one might try the following modification:

Attempt 3: Almost there... but not yet

To make the system go out of the saturation at the correct time, we need a logic to control the integration of the first integrator based on the input and position. This can look like:

Now we have something that is nominally correct and mostly satisfies the systems equations. However the model has inefficiencies due to unnecessary zero crossings, and a subtle inaccuracy.

If we look closely at the series of events when the system goes out of the saturation, we can see:

If you are like me, at this point you are probably telling yourself: There's got to be a way!

Actually, it is possible to use the State Port of the position integrator and obtain a solution that is both efficient and numerically correct. To make the logic clearer, I used a continuous-time Stateflow chart: 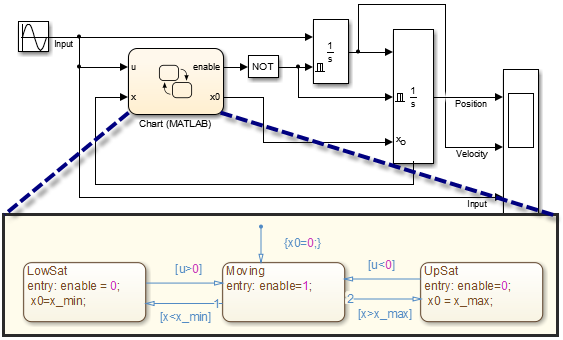 But there is a catch... if you look at this implementation carefully, you will notice that the relation between the input signal and the position output signal is directfeedthrough. This means that when you will try using this cylinder model in a realistic model including a feedback loop like the one at the beginning of this post, this will result in an algebraic loop.

I hope you are now convinced that the Second Order Integrator is the way to go for this use case!

All I have to do is enabling the Limit x option, and ensure I leave the Enable zero-crossing detection in the block dialog 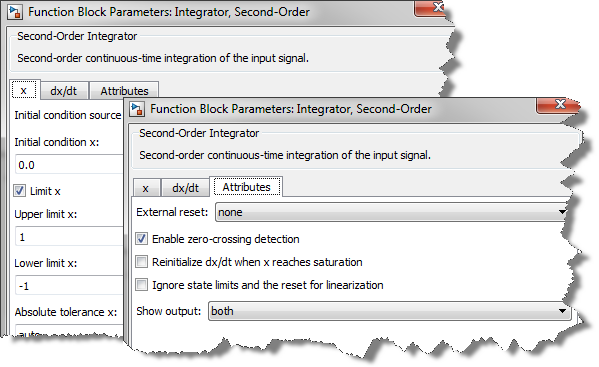 After logging data and using the Simulink Debugger, we can see that this implementation using the Second Order Integrator generates 50% less zero-crossing events and can be solved in 25% less time steps than the implementation showed at step 3 above. In a large model, this can have a significant impact on performance.

Try the Second Order integrator and leave us a comment here.