I received a request last week where the code generated using Real-time Workshop was giving different answers from the original simulation. This type of requests is the one that scares me the most, because the goal of Real-Time Workshop is to generate a code equivalent to a Simulink model.

Let's see how I approached this challenge!

The first thing I do when I have a “different results” case is to confirm what the user reports. I built the model using the GRT target and compared the logged data. They are different! 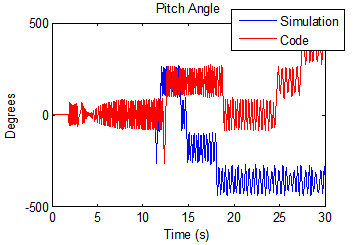 The model had an architecture similar to the NASA HL-20 demo shipping with the Aerospace Blockset.

This architecture is used in many domains where the motion of a body in space must be simulated, for example robotics and aerospace.

Let’s take a closer look at the different data and zoom on where they diverge: 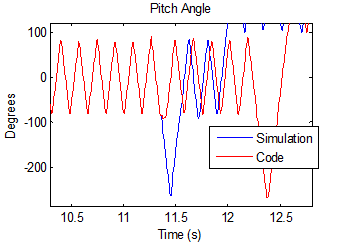 This signal represents an orientation oscillating between +90 and -90 degrees and we see that there is a clear switch around -90 degrees.

This is when Seth passed by my office. Based on the indices we had, he suggested that the model might be very sensitive to numerical perturbations. It is well known that floating point round off can cause small differences on the order of eps between generated code and simulation. But when a system is very sensitive and unstable, a difference even as small as eps can grow into completely different results. 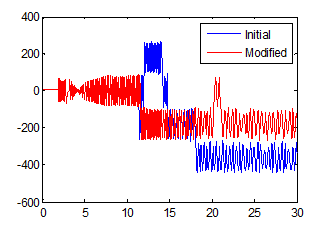 Now that we know that the model is numerically sensitive, it would be great to fix it!

Having generated six degrees of freedom trajectories for robotic manipulators in the past, I remembered learning somewhere that the Euler angles representation of orientations has a singularity, known as the gimbal lock.

In the 6Dof Euler Angles block, the angles are obtained through integration of the Euler Angles derivative, which is computed using this equation:

is the the rate of change of the Euler angles. In this equation, when theta is close to 90 degrees the matrix becomes badly scaled and causes the numerical sensitivity described above.

An alternative to integrate the body motion is to compute the rate of change of rotation quaternions instead. :

Quaternions have a lot of advantages: They are numerically more stable than rotation matrices and avoid the gimbal lock problem of Euler angles.

In the Simulink model I replaced the Euler Angles implementation:

by the quaternion representation:

What is your process of investigation when Simulink does not give the results you expect? Leave a comment here