On this blog, I sometimes highlight features that it took me a while to appreciate and include in my daily workflow.

I hate to admit it, but quite often those are features that I was aware of for a long time, but for various reasons I was scared of using. Most of the time, I had seen those used in some complex application and I thought it was very complicated to use.

This week I will share something that turns out to be simpler then it looks: Adding menu items in Simulink.

Which task do you often need to do?

In Simulink, we try to add menu items and define shortcuts for common tasks that we know most users need to do. For example, everybody needs to save models, so we have a button on the toolbar and a shortcut (Ctrl+S).

However, if there is a task you do frequently, adding custom menus and shortcuts can significantly speedup your workflow.

In my case, I often need to debug large models made of buses, simplifying the problem by removing parts of the model. I reduce the complexity by replacing many blocks with one Constant block outputting a bus signal.

When I realized I could do that with less than 10 lines of code, I was pretty happy: 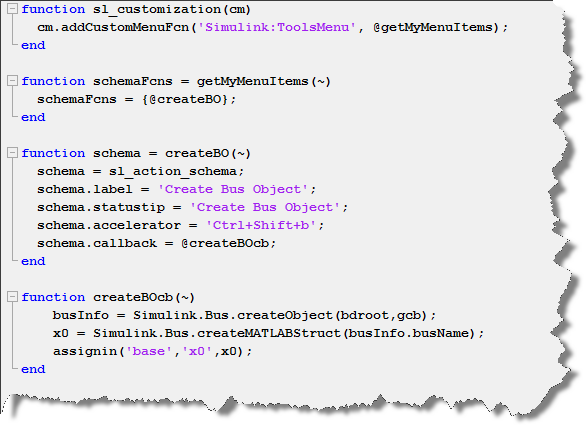 Here is how it works:

I could probably make the callback more robust, but I wanted to keep this example as simple as possible to highlight the concept.

Once this file is saved somewhere on my path, I refresh the customizations using sl_refresh_customization and I can use my new entry from the Tools menu, or using Ctrl+Shift+B. 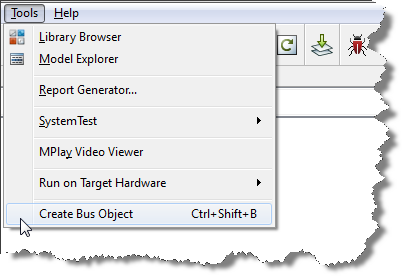 For more examples, I recommend looking at the MATLAB Central submission highlighted by Seth in a previous post: Customizing the Simulink Interface Demo by Saurabh Mahapatra.

Do you add menu entries and shortcuts for the tasks you accomplish frequently? What are those tasks? Let us know by leaving a comment here.