In R2013b, you will notice a new block in the Simulink Library Browser: The MATLAB System block. 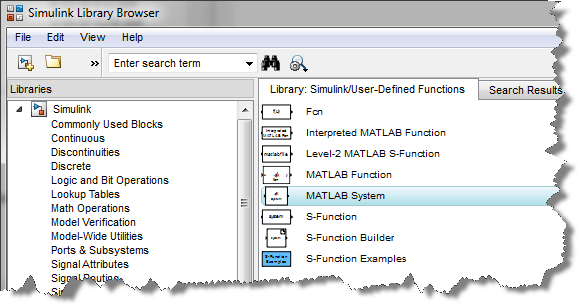 Before looking at the MATLAB System block, let's looks at the evolution of System objects.

In R2010a, System objects were introduced in the Signal Processing Blockset. In contrast to MATLAB functions, System objects are object-oriented implementations of algorithms that can automatically manage state information, data indexing, and buffering, which is particularly useful in digital signal processing.

In R2011a, System toolboxes were introduced. Built on System objects, those toolboxes give you the possibility to design (in MATLAB or Simulink) signal processing algorithms suitable for fast simulation, real-time prototyping, and embedded implementation.

In R2013b the MATLAB System block makes it very easy to use custom System objects in Simulink.

To illustrate the concept of using a System object in MATLAB and Simulink, I made a timesTwo System object based on the AddOne example included the documentation.

For that, all I need is to create a new class file, which inherits from the matlab.System class. Then I put the equations for my block in the stepImpl method:

I can use this System object in MATLAB with just two lines of code: 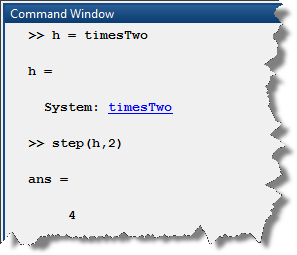 In Simulink, it is as simple a dragging the block, and specifying the name of the object:

Why do we need a MATLAB System block?

In the next weeks, I will follow up with a series of posts on the MATLAB System block to highlight more of its capabilities. For today, I will leave you with an example of a unit delay. When using the code below in the MATLAB System block, the input is marked as non-directfeedthrough. This makes it possible to use this block in loop without creating an algebraic loop. 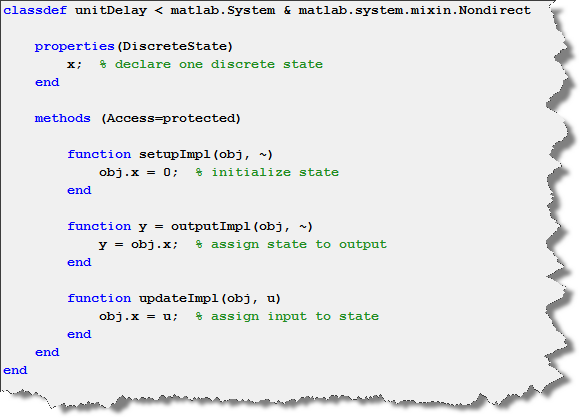 The MATLAB System block has the advantages of the MATLAB Function block: it is authored using the MATLAB language and can generate code. In addition, it gives you control over many properties that you could only access through C and MATLAB S-function... and all that in a modern object-oriented style of programming.

Try the MATLAB System block and let us know what you think by leaving a comment here.