This week, Corey Lagunowich is here to talk about a very useful Stateflow feature, the Active State Output.

Did you know that with Stateflow, it is possible to monitor which state is currently active, and use that information in the rest of the Simulink model? This feature is named Active State Output. The screenshot below shows how to do this for one of the charts in the example Temporal Logic Using the AT Function. 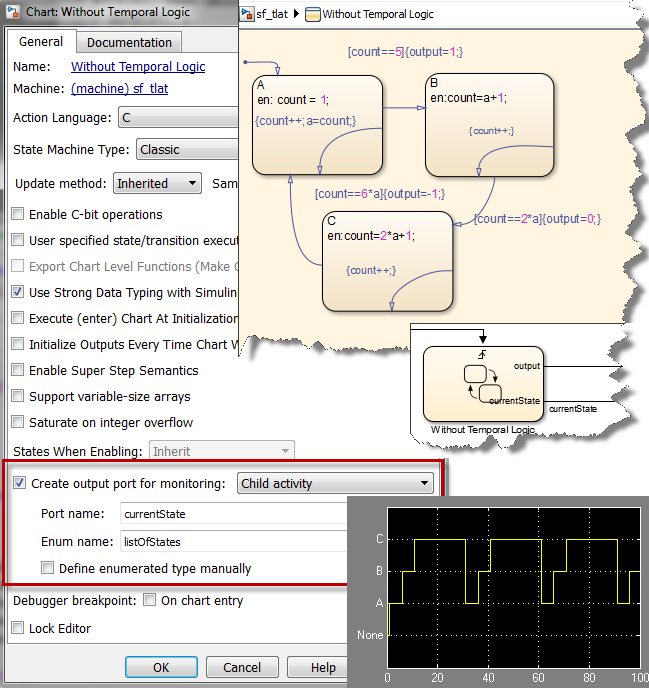 The checkbox creates a new output port on your chart block, whose value (in simulation) is of an enumerated type with values that match the names of the child states.

When doing this for a chart with parallel decomposition, Active State Output needs to be enabled for each parallel state individually, and each parallel state has a separate corresponding output port. (The sf_car demonstration uses this to output the current gear selected by the shift logic to its transmission model).

We can also take advantage of this feature in order to accomplish something special in the code generated from Stateflow charts.

When using Embedded Coder to generate code from Stateflow charts, by default the states of the chart are created as macros using the #define directive. For example, here is a snippet from the generated code from the chart shown above.

The macros are grouped together by chart under an identifying comment line, but there is no intrinsic distinction as to which chart they belong to.

Now, in the *_types.h generated code file, there will be an enumeration definition, like so:

And in the generated c code for the model, macros for the chart  are no longer defined; rather, a global (with the name of the signal) is declared of type listOfStates:

Further down in that c code file, you will find a switch-case statement that implements the logic of the Without Temporal Logic chart, like so:

When you enable Active State Output, you can also check the “Define enumerated type manually” box and click on the helpful hyperlink to automatically create a template m-file that defines the enumerated type.

At the top of this file you will find an enumeration declaration with a list of all the state names. Tempting as it may be, you cannot change these names here unless you also change them in the chart itself. However, you can use this file to change some other behaviors using the methods that follow (but that’s a blog post for another day).

Are you already using the active state output? Give this a try and let us know what you think by leaving a comment here.