As you may know, it is easy to run Simulink models on a set of supported target hardware. This has been possible since R2012a.

Even if we add more targets and support more features for each target with every new release, it is still possible that you will need a driver that is not included in the Simulink support package. If you desperately need a driver for your hardware, you can always build it yourself.

Let's see how this works using an example from a LEGO NXT project I worked on.

The LEGO NXT kit ships with a Light Sensor including a red LED that can be turned on or off. In the Simulink support package, you can control the light from a checkbox parameter in the block dialog.

For our project, we used this sensor to make a line following robot. To make our algorithm more robust, we thought it would be interesting to turn the light on and off while tracking the line, to actively filter out the ambient light.

Step 1: Determine the code to be generated for your driver block

In the LEGO MINDSTORMS NXT Support from Simulink, you can find many small examples showing how the robot can be programmed in C. By default, they are located in C:\MATLAB\SupportPackages\R2013a\nxtOSEK\samples_c. In one of those example, I found a function initializing the robot that looked like:

Here you have 2 options to create the S-Function

My colleague Giampiero Campa published a very good submission on MATLAB Central titled Device Drivers showing how to use the S-Function Builder block to include the code you found during step 1 in your model.

His submission contains detailed procedures and screen captures to guide you through the process step-by-step. If you are intimidated by writing an S-function, I recommend using his S-Function Builder technique.

Step 2 - Option 2: Writing an S-Function and a TLC file

If you are like me and want to understand the magic that is happening when you click build in the S-Function Builder block, this second option is for you.

First, we need to realize that unless you model the interaction of the sensor/actuator with the environment, in simulation, driver blocks typically do nothing. All blocks must specify the number of ports and parameters, and their dimensions, even if they do nothing. In my case, I created an s-function with 1 input port of dimension 1 to specify if the light should be on or off. Here is the entire code for my s-function. 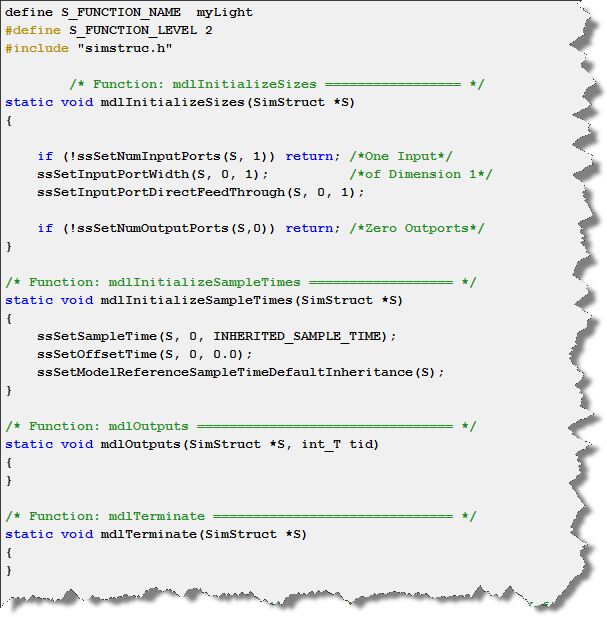 To specify the code generated for your block, you need to use the Target Language Compiler.

Concretely, this means that you need to write a TLC file for your block. For that, I recommend starting with examples from sfundemos. 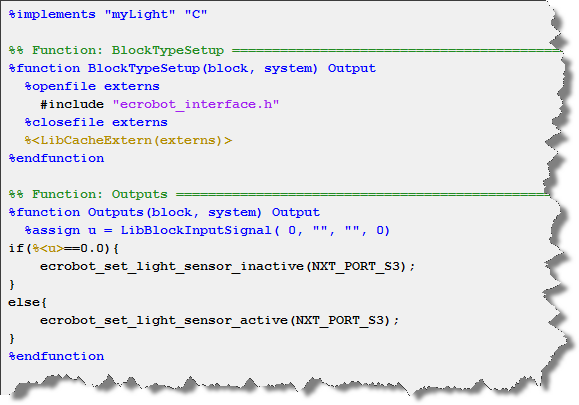 Note that I used BlockTypeSetup to include the header file, and Outputs to define what the block output method should be.

Download this LEGO example or a similar example for the Arduino target and begin creating your own driver blocks!

If you develop custom drivers for the Simulink Target Hardware, share them on MATLAB Central and let us know by leaving a comment here.