Today I want to share a discussion I had with a few fellow guest bloggers: Corey Lagunowich, Zack Peters, Matt Brauer and Seth Popinchalk.

Corey: Hey guys, did you hear about the Patriots "Deflate-gate" story?

Zack: Yeah, they say that 11 out of 12 balls were inflated 2 PSI less than the minimum value!

Corey: There could be many reasons why the balls were measured at the prescribed 12.5 PSI before the game, but lose pressure by halftime.

Matt: Do you think they cheated, or that this situation can be explained by some math and physics?

Seth: We should make a Simulink model of the thermodynamics involved in that story.

Guy: My thermodynamics knowledge is pretty rusty, but I bet that with Simscape we can build up something in just a few minutes.

Guy: Et voilà! Here is what the model looks like: 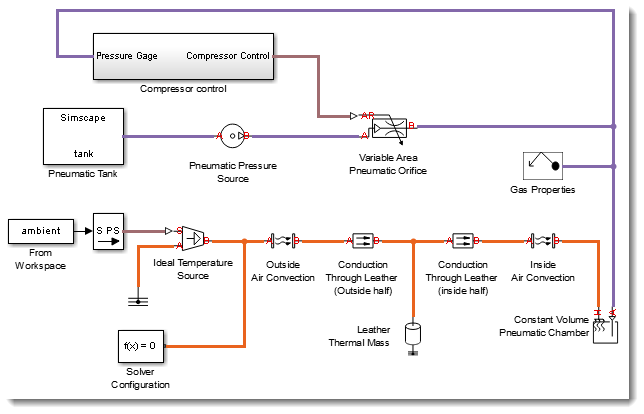 Seth: Good job guys! Can you explain to us how you built that?

Zack: Sure! As you can see, the football is modeled using a Constant Volume Pneumatic Chamber. To the thermal port, we connected in series the convection inside, the conduction through the leather and the convection outside.

Corey: For the outside ambient temperature, we took the historical data from a weather station in nearby Norwood, MA.

Guy: And the Compressor Control subsystem is there to first inflate the ball with air at a fixed temperature up to a desired pressure. A Stateflow chart turns off the inflating action for the rest of the simulation once the ball first gets up to the prescribed pressure.

Matt: Great, I heard a few theories that the ball being inflated with hot air could explain this pressure drop. Can we confirm that?

Corey: With this model, we are able to follow the evolution of the temperature and pressure inside the ball throughout the game day. 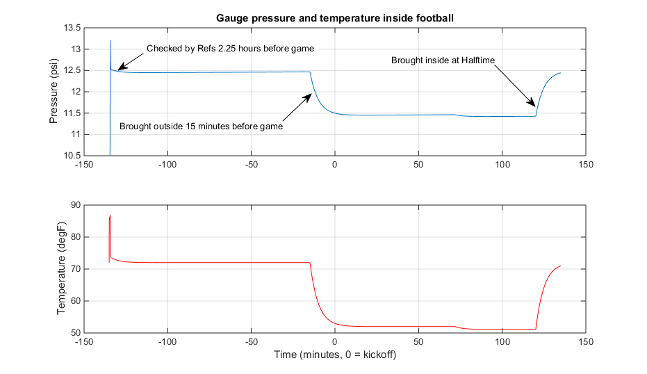 Matt: I guess that rules out the hot air theory. I am curious though, I am sure I read somewhere that the football should take longer than that to cool down when taken from inside to outside.

Guy: We are getting there... One interesting thing I found is that the component with the most impact here is the thermal mass of the leather. This is why the hot air is immediately cooled down by the leather at ambient temperature.

Corey: The simulation times all correspond to what happened, or at least what's been reported. The balls are filled roughly 2 hours before game time, and not taken outside until just minutes before kickoff. As the simulation goes, we then move the ball outside, to about 50 degrees Fahrenheit, and then it takes roughly 20 minutes for the air inside to stabilize at the new ambient temperature.

Zack: The ideal gas law governs the magnitude of the pressure drop - roughly 1 PSI when the air temperature changes from 73 to 50 degrees Fahrenheit. But thanks to Simscape we can see the time it takes to get there.

Seth: And I can see that at halftime you simulate the ball being taken back inside and warming up.

Matt: We simulated the ambient temperature going back up to room temperature, assuming that the refs took the balls into their locker room to test them. If they stuck a gauge into the footballs right away, the pressure would still have read low. But wait a few more minutes…

Corey: When combined with other possible effects like accuracy of the gauge and leakage, it seems pretty obvious that the Patriots didn't cheat.

Guy: Corey, you are too much of a fan... The results of our simulation show how the ball pressure and temperature varied through that day, but in no way can they confirm what happened that day... too many unknowns.

Do you also use Simulink or Simscape to analyze controversial topics? Let us know by leaving a comment here.

And one last thing ... if you want to know just which way we might be biased on this issue, well, just check out where our corporate headquarters are located.